Texas Senator Ted Cruz thinks that if ex-President Donald Trump were to announce his intention to run for president in 2024, it would force other GOP hopefuls to reassess their plans.

Speaking to Fox News at the Turning Point USA conference in Tampa on Friday, Cruz said: ‘I’m sure it clears it out significantly.’

He added: ‘We’ll see what happens. Look, the lay of the land is everyone is waiting to see what Trump decides to do. Anyone who tells you they’re not is lying to you. And he’s going to decide on whatever time frame he desires.’

Trump remains hugely popular in the Republican party, although Florida Governor Ron DeSantis is fast emerging as a new star. Many have professed a fascination to see a contest between the two men should both decide to run for office.

Earlier in the interview, Cruz continued to demonstrate his admiration for Trump saying that the twice-impeached ex-president would ‘do what he wants’ in 2024.’ He continued: ‘[Trump] will remain an ‘incredibly important leader in the United States.’ 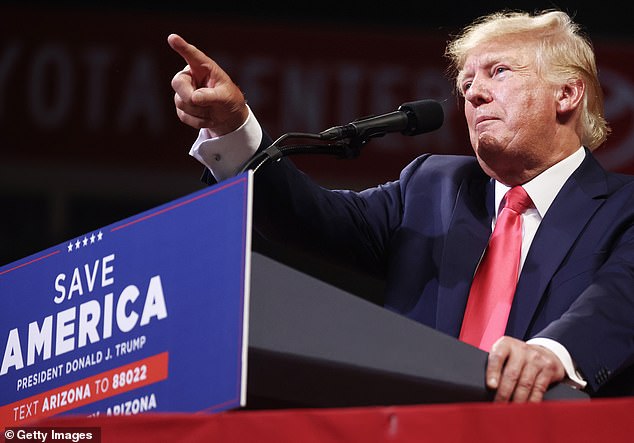 Trump is pictured in Arizona on Friday night. He gave yet another hint he plans to run for office again in  2024, but has yet to formally announce a presidential bid

Famously, Trump and Cruz butted heads on a consistent basis in the 2016 Republican primary race.

At one point, Trump retweeted a professional photo of his former model wife, Melania, side-by-side with an unflattering picture of Cruz’s wife, Heidi.

The caption read in part ‘the images are worth a thousand words.’

The Texas lawmaker responded by saying: ‘Donald, real men don’t attack women. Your wife is lovely, and Heidi is the love of my life.’

When Trump ascended to the presidency, Cruz, who became known as ‘Lyin’ Ted’ in MAGA circles, became one of the former ‘Apprentice’ host’s most ardent supporters.

In his recent Fox News interview, Cruz said of his former sparring partner: ‘I think he accomplished an enormous amount as president, and I was proud to work hand in hand with him in achieving results for the American people.’

He also said that despite the media’s ‘hatred’ of Trump, voters were ready to ‘move back to the direction of common sense.’

Cruz also took aim at the media calling them ‘biased’ in their attempts to ‘cover up the miserable failures of the Biden administration.’

The Turning Point conference draws 5,000 young conservatives from across the country to hear speakers such as Florida Governor Ron DeSantis, Senator Ted Cruz, and of course, Donald Trump.

Senator Cruz was among the speakers on Friday night, where he poked fun at New York Congresswoman Alexandria Ocasio-Cortez and said that ‘pronouns can kiss my a**.’

Kirk, who founded Turning Point in 2012, introduced DeSantis at the conference by saying that the governor was ‘a man that has been courageous on every single issue.’

He continued: ‘I don’t know what is in the future for this man, but it’s something pretty special.’

Ahead of his appearance at the Turning Point conference on Saturday night, Trump offered one of the strongest suggestions yet that he plans to run for president again in 2024, referring to his past campaigns and saying ‘we may have to do it again.’

Trump made the remarks while addressing a boisterous rally in Prescott Valley, Arizona on Friday, where he repeated his unproven claims that the 2020 election was stolen from him.

‘I ran twice, I won twice, and did much better the second time than I did the first, getting millions. more votes in 2020 than we got in 2016,’ Trump claimed. ‘And likewise, getting more votes than any sitting president in the history of our country by far.’

Trump was in Arizona to stump for former television anchor Kari Lake, a GOP candidate for governor who supports his discredited election claims. 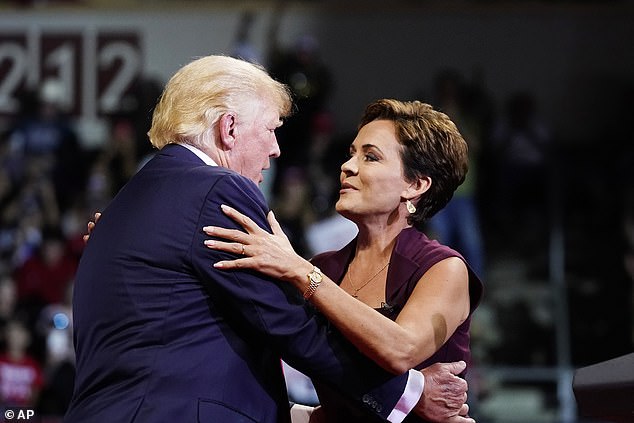 Trump was in Arizona to stump for former television anchor Kari Lake, a GOP candidate for governor who supports his discredited election claims

Earlier this month, Trump told New York Magazine that he had already made up his mind about a run, and that the question he was now mulling was whether he’d pull the trigger before or after the November midterm elections.

‘Do I go before or after? That will be my big decision,’ he said.

Some Republican strategists fear that if Trump throws his hat in the ring before the midterms, it could upset the GOP’s chances of winning back majorities in the House and the Senate.

‘Of all the selfish things he does every minute of every day, it would probably be the most,’ one GOP strategist told the Washington Post this month.

‘Everything we are doing that is not talking about the economy is going to be a disaster.’

Trump appeared to suggest on Friday that he would wait to announce until after the midterms, saying: ‘But first we have to win a historic victory for the Republican Party. this November when we retake Congress.’

In Arizona, Trump continued to tout claims that the election was stolen from him and said that despite receiving a ‘record number of votes,’ he has been the most ‘persecuted person’ in America.

‘A friend of mine recently said that I was the most persecuted person in the history of our country,’ Trump said. ‘I thought about it, and I felt, you know, he may very well be right.’

Small plane crashes into the water off Huntington Beach